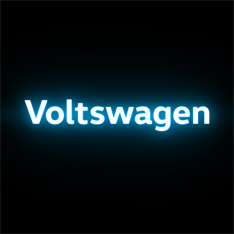 In an effort to declare its significant investment in e-mobility, Volkswagen Group of America is changing its name to Voltswagen of America.

By definition, volts are derived units for electric potential between two points — a true symbol of the company’s forward momentum to move all people from point-to-point with EVs.

Always one to be bold, Volkswagen of America was founded in 1955 and won the American public over with the Type 1 Beetle, which eventually overtook the Ford Model T as the world’s best-selling car with more than 23 million sold. From that legacy, the company now embarks on its electric mobility future.

“We might be changing out our K for a T, but what we aren’t changing is the brand’s commitment to making best-in-class vehicles for drivers and people everywhere,” said Scott Keogh, president and CEO of Voltswagen of America. “The idea of a ‘people’s car’ is the very fabric of our being. We have said, from the beginning of our shift to an electric future, that we will build EVs for the millions, not just millionaires. This name change signifies a nod to our past as the peoples’ car and our firm belief that our future is in being the peoples’ electric car.”

This month, the company welcomed the ID.4, its first long-range, all-electric, zero direct emission SUV in dealerships across America. It is the company’s first product sold nationwide that confirms VW’s commitment to sustainable mobility.

In support of the ID.4 roll-out and the company’s commitment to electric vehicles, Volkswagen debuted yesterday its first short film aimed at catalyzing the mass adoption of electric vehicles. The media spots aim to introduce viewers to the benefits and differences of the ID.4. It draws on real-world scenarios to demonstrate the vehicle’s capabilities, centered around the concept, “Before it can change the world, it has to change yours.”

Volkswagen Group became the first major automaker to support the goals of the Paris Climate Agreement, with an added target of a 30% reduction in the company’s carbon footprint by 2025 and net-carbon neutrality by 2050. A resulting commitment to sell 1 million EVs worldwide by 2025 will see more than 70 electric models launched across the VW group brands by 2029.

Voltswagen of America has its manufacturing facility in Chattanooga, Tennessee, where it currently builds the Passat and Atlas SUV and is adding the ID.4 to its production roster this year.