If someone were to ask you which cars have been built in Nashville, Tennessee, you might be forgiven for responding with the names of Nissan and GM vehicles. But the correct answer would not include either.

The only vehicle ever built in the city of Nashville was built more than 100 years ago: the Marathon.

Never heard of it? Not that surprising, considering that the Marathon was one of dozens of car nameplates that appeared and disappeared in the period between the late 1800s and the economic downturn of the Great Depression. In fact, the Marathon only lasted seven years – from 1907 to 1914, but that’s not to say those weren’t exciting years for the automaker.

Its history goes back to a post-Civil War start up called the Sherman Manufacturing Company, which opened in 1874. Later it was sold and renamed the Southern Engine and Boiler Works, which opened in Jackson, Tennessee in 1884 according to a story on TripSavvy.com called “The History of Nashville’s Marathon Motor Works.”

The company built steam engines and sawmills, and was prosperous enough to run ads touting its wares well past the turn of the century, and long after the Marathon had come and gone. When Southern Engine and Boiler turned its attention to the booming field of automobile manufacturing, it relied on a mechanical engineer who was considered gifted – William H. Collier who, in 1906, began working on the car they would first call, “The Southern.”

The car had a slow start, as noted in a Wikipedia article: “The company’s newsletter daily remarked that the car ‘should move, but don’t.’”

But Collier and his colleagues didn’t give up.

“Then as now it was common for auto manufacturers to outsource some of their components, concentrating on assembly and marketing, and perhaps manufacture of a few major systems. Southern Engine took a different approach however, and rather audaciously decided to engineer and build every single part of its car in-house,” Wikipedia reports.

“By 1909, the company released two different models, the A9 and the B9. Each vehicle featured a 35 horsepower, 4-cylinder engine,” says the website of trolleytours.com “The A9 was a five-seater touring car, while the B9 was a rumble seat roadster. For just $1,500, people could purchase either, with a top being an optional extra.” 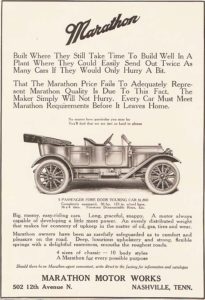 By 1910 Southern had successfully built 600 cars under that Southern brand, and attracted the attention of a Nashville businessman, and his investors, who bought the automotive concern, and relocated the operation to the former Phoenix Cotton Mill building. Because there was already a company making cars under the same Southern name, the company decided to change the brand of it’s expanding vehicle line. It spun off into the Marathon Motor Works – the name inspired by the 1904 Olympics (where the actual marathon was the weirdest of all the weird things that happened at the competition that year) — and from 1910 forward the cars bore that badge.

When the company relocated to Nashville, it really took off, according to TripSavvy’s Jan Duke: “When relocation was complete, Marathon expanded its line from the original A9 Touring Car and B9 Rumble seat Roadster. By 1911 five models were offered, and by 1913 they had increased to 12 different models. The car was a complete success with the public, and production could hardly keep up with demand. Marathon had dealers in every major city in America; by 1912 they had achieved production capacities of 200 cars monthly, with plans of 10,000 yearly.”

Wikipedia gives a similar account: “Marathon was soon on a genuine roll, even by the exuberant standards of the exploding auto industry. The cars acquired a good reputation for quality and durability, probably helped by the fact that the factory had total control of its parts, engineering and manufacturing. New models and national advertising followed, and production soared to 10,000 units in 1912. Dealers were signed up literally on every continent and demand considerably exceeded supply.” 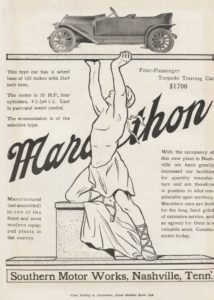 Despite all that good fortune in business and the shiny public image, the internal operations at Marathon were actually rife with turmoil. In 1913, Collier filed charges against his bosses, claiming they weren’t managing the company properly and that suppliers were not being paid. “The company had seen three presidents in four years,” Duke writes. “Through bad investments and management decisions, the company was in dire financial shape.”

In the end, production ground to a halt in 1914. The Herff Brothers and H.H. Brooks of Indiana, operating as Herff-Brooks Corporation, bought the assets of Marathon. Using some of the same personnel – Brooks had been a Marathon officer, himself – the company operated for a short time building the car in Indianapolis. But Herff-Brooks itself was out of business by 1916.

There are, according to some sources, as many as nine Marathon automobiles left, with four of them in the possession of the current owners of the Marathon Building and at least one in the hands of some Argentine collector as noted on Wikipedia: “ This unique car is in perfect running condition and it is owned by an Argentinian collector who has worked for two years in order to restore it. This collector has managed to maintain all its original parts as if it were just released for sale.”

If the Marathon itself has fallen into relative obscurity, the same cannot be said for the building where it was built. That building has its own legacy. According to TripSavvy, after Marathon stopped making cars in Nashville, “The Nashville Marathon building remained open, with a skeleton crew producing parts until 1918. The building sat vacant until 1922 when it was purchased by Werthan Bag Company and subsequently filled with machinery for cotton bag manufacturing.”

In 1990, Jackson-native real estate developer Barry Walker bought the abandoned Marathon Motors building – he also bought the Southern Engine and Boiler Works buildings in Jackson – and gave Marathon’s old home a new purpose. Now known as Marathon Village, the former car factory houses creative activities of several types. Walker’s “vision was to develop a thriving creative community that would serve as a cultural, artistic and performing arts venue,” according to Nashville Tours. “After purchasing the property, he began renovation. A challenging aspect to the refurbish was the fact that each of the buildings on the property had been built in different time periods, and thus were of different architectural styles. The new spaces that evolved are not only unique, they capture the essence, personality and creativity that the founders of Marathon possessed.”

One of the shops in Marathon Village is Antique Archaeology, famous as the location from the popular television show “American Pickers.”

Walker also devoted part of the space to a museum where he displays memorabilia and Marathon Motors cars themselves. It just demonstrates in a way, that like the name they bear, Marathons went quite a distance.