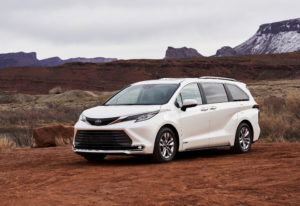 Toyota Motor North America has redesigned the fourth generation of the Sienna minivan, with a standard hybrid powertrain now across all trims and an array of new tech and amenities.

For those who enjoy the outdoors, the 2021 Sienna is rated to tow up to 3,500 pounds. Other amenities available include rooftop carrier, bike racks and a 1,500-watt inverter with 120V AC outlet to power camping equipment.

“This is an all-new vehicle from the ground up, including a new chassis platform, as well as a new electrical platform,” said Chief Engineer Monte Kaehr.

The front design was inspired by the iconic Shinkansen Japanese Bullet Train to appear sleek, speedy and confident. The ultra-sporty XSE model amps up the excitement with dark 20-inch split 5 spoke wheels and aggressive front and rear bumpers.

Toyota designers listened to current Sienna owners about what they wanted in a vehicle. With key terms like confidence, refinement and smart innovation, the spacious interior gives personalized space to the driver and front passenger through a large center touch display, handy storage and innovative bridge console that is ergonomically positioned high between the driver and passenger for ease of use.

A feature the 2021 Sienna driver might not even notice is the model’s new hybrid powertrain, which delivers 243 total horsepower and a manufacturer-estimated 33 combined miles per gallon fuel economy, the latter setting a benchmark for the segment. The driver will feel ultra-smooth acceleration and hear very little noise.

Critically, the Sienna has no plug, and there is no need to ever recharge the hybrid battery pack, and certainly no need to spend thousands installing a battery charger in a garage. The Toyota Hybrid System II charges the battery automatically as the vehicle drives. This new vehicle is strictly gas-and-go, with fewer stops for gas thanks to the hybrid system’s efficiency.

The 2021 Sienna is the only vehicle in its segment that combines the hybrid powertrain with all-wheel drive, available on all model grades. Instead of a heavy AWD transfer case and space-robbing driveshaft to the rear wheels, this AWD system uses a separate independent electric motor to power the rear wheels the instant additional traction is needed and at all vehicle speeds. This new system also enhances cornering agility, giving the Sienna a more confident handling feel.

The 2021 Sienna comes well equipped in the LE grade and adds more amenities and tech in the higher grades. Options are grouped in the LE Plus, XLE Plus and XSE Plus packages. The Limited and Platinum grades have no packages but do offer two factory options, including the option to add the 1,500-watt inverter in the XLE grade and above.

Toyota Motor North America is headquartered in Plano, Texas. Toyota has a number of manufacturing facilities across the South including in Alabama, Mississippi, Kentucky and Texas.