Home Features The Beauty of Speed

If you look around the Barber Vintage Motorsports Museum in Birmingham, Alabama, you might not be surprised to find familiar automotive names and badges: Chevy. BMW. Maserati. Maybach. Daimler. Ducati.

But you might be surprised that all those labels are attached to motorcycles alongside Honda, Suzuki, Yamaha, Kawasaki and Triumph and a whole slew of other brands, many well regarded, some legendary, and sometimes consigned mostly to history: BSA, Benelli, Brough Superior, Norton, Horex, Indian, Parilla, Moto-Guzzi, KTM, Moro Morini, F.B. Mondial, MZ, CZ, Vincent, Aer Macchi.

With so much chrome, so much leather and so much rubber to burn, Barber is like heaven for motorcycle enthusiasts. It boasts of being the world’s largest motorcycle museum.

In its five levels, the museum boasts more than 1500 bikes (not all on display), ranging from a replica of the wooden, steam-powered velocipede which may have been the first motorcycle, (and another wooden one Daimler and Maybach built which may also lay claim on being the first) to sleek powerful machines built for modern speeds approaching 200 miles per hour.

The Pierce 4 from 1910. The 1938 Brough Superior like the one T.E. Lawrence (of Arabia) rode. A replica of the “Captain America” chopper from the movie Easy Rider. Bikes connected to Michael Jordan and Jeff Gordon, not to mention Steve McQueen.

There is also much to love for car fans; the museum boasts an incredible collection of Lotus race cars through the decades—the biggest in the world, according to founder and former professional Porsche racer George Barber—as well as a Model T Ford, and examples of MG and Ferrari sports cars.

But as mindblowing as the motorcycle museum is, it is just the centerpiece of what Barber has brought to life on 880 acres on the extreme eastern edge of the city.

“They call our racetrack the Augusta of Racetracks, after the golf course.  We have 18,000 crepe myrtles, and 16,000 azaleas, and we have over 850,000 bulbs in the ground,” Barber says. “And it really is luscious. It really is a beautiful, beautiful park that happens to have a racetrack in it.  We give garden tours and we take garden groups around to show them, and these are generally people that don’t give a damn about racetracks and are a little worried about being on a racetrack from all the things they’ve heard about the dirt and the oil and the dot, dot, dot; and we get them out there and show them what we’ve got, and they’re just dazzled.”

Barber is proud of what he and his team have accomplished at the park, which is evident when he gives a high-spirited tour around the track, the proving grounds and other more hidden areas of the site. He knows the funny story behind every whimsical piece of art—and there is a lot of it there, on grassy knolls, peeking out of the water—as well as the details of the carefully selected landscape plants all around the track, and the different grades of pavement, some for racing, some for testing by professionals from Mercedes and Porsche, both of which use the Barber facilities for training and teaching.

The Barber track regularly attracts hundreds of thousands of people to watch world-class drivers in Indy races and other events. He’s taken pains to make Barber Motorsports Park a first-rate facility, because, he says, that’s the kind of quality it takes to get people to come to Birmingham.

“One of the main reasons I did it was to get people to Birmingham that normally would never come, and it’s done just that.  As a matter of fact, since the first of the year, we’ve had people from 61 different countries come here to Birmingham,” he says.

“Now, when we get these people here and they can see our environment and what we do here, and how lovely a place it is, hopefully one may decide to open a business here. One may come and want to build a building here; you never know.  But overall, I think we’ve generated over one billion and four or five hundred million dollars in benefits in taxes and stuff for the state, so that’s done a good thing.” Actually, according to a recent Barber brochure that economic impact number keeps climbing – now it is nearly $1.8 billion.

Why does he care so much about the city? “The city has been good to me and my family, and I’ve enjoyed being here, and it’s a lovely place to live and be,” Barber says. 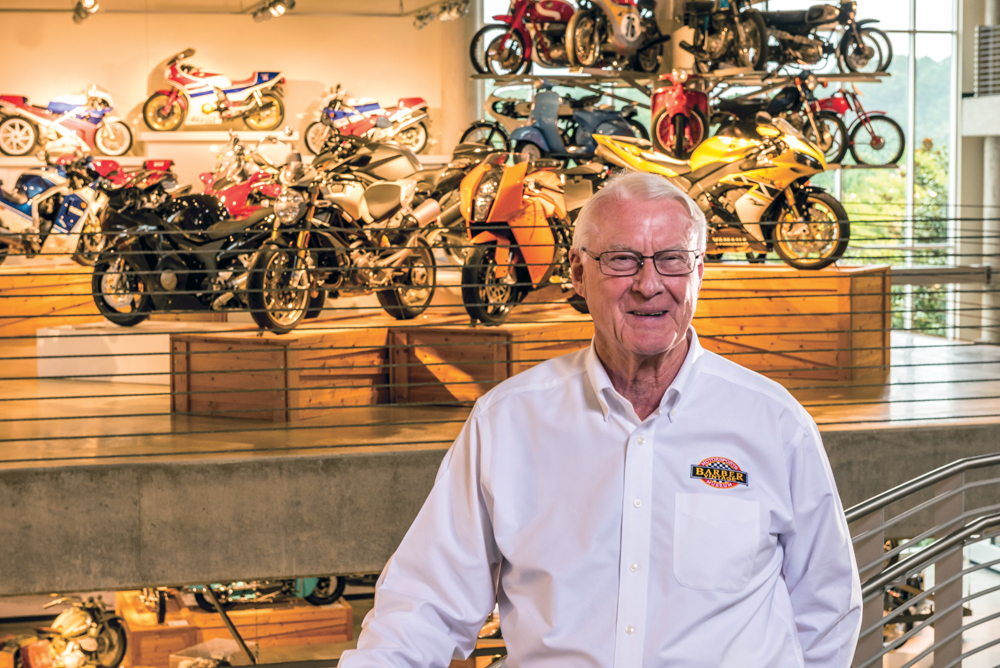 The Barber family was known for the dairy business; Barber’s name still remains on milk, ice cream and other products, even though George Barber sold the business more than 20 years ago. But long before that, when his father was still running it, Barber worked there and raced whenever he got a chance.

“I guess I started about 1960 and went to some wonderful driving schools in Europe,” Barber recalls. He raced Porsches and won several races – he has 63 first place trophies. He mostly raced in the American Southeast, for one very simple reason:

So after several years of racing   cars, Barber says, “I quit … my dad died at 70 in the middle of ’70 and I had to start racing the milk business, which was a little bit more dangerous than racing cars.”

He sold the dairy business after almost 30 years, then went into real estate. But he never got racing out of his blood. At one point, he considered opening a car museum, but several things happened. One of them was when his friend Dave Hooper gave Barber a couple of motorcycles – one of them described on the Barber website as a “rare, exquisitely detailed 1952 Victoria Bergmeister” and Barber was hooked.

He started collecting bikes in 1994 and opened the museum as a 501(C) 3 nonprofit the following year in downtown Birmingham.

Another pivotal moment came in 1997 when Barber sent 21 of his bikes to the Guggenheim in New York for The Art of the Motorcycle exhibit, which traveled to Chicago and Spain. And that sparked his desire to create a world-class museum back home. The new museum with its 16-turn, 2.38 mile track, opened to the public in 2003.

Today, surrounded by a vast and growing collection of motorcycles, three-wheelers, and so on, Barber refuses to single out just one. “Well, you know you really don’t have a favorite child,” he says with a smile. “But if I had to pick some that were of great interest to me and great affection, it would be the John Surtees’ motorcycles that he used to win world championships.  And it’s because of my relationship with John over the years and our friendship over the years, and him coming to the museum and racing the bikes, or driving the race bikes on the track and demonstrating them,” Barber says. “ I’ve got to say that those kind of have a real soft spot in my heart.”

The Surtees bikes have their own section in the museum, which has artfully arranged motorcycles throughout – cop bikes over here, military bikes (American, British, and German) over there, scooters here, motocross bikes there. And if you stand at certain angles, you can actually see a sort of tree of motorcycles extending up to the ceiling.

Barber says the tree didn’t turn out exactly as he’d hoped. “It didn’t work as well as I thought it would because we had to make spaces between the floors.  I wanted a tree that goes from floor to floor all the way up, and it kind of does. But you can see where it’s interrupted where the floor is, and it doesn’t have that visual effect that I was really after.”

Barber doesn’t give the impression that he’s really bothered by the tree effect and neither do the visitors wandering through the galleries pointing, taking pictures. By all accounts the motorcycle museum and the racecourse and park around it, are a hit.

“A lot of times … I tell people, ‘Come look at my museum; I’ve got a motorcycle museum.’  And you can see their eyes kind of roll back in their head, and they say, ‘Oh, God, I’m going to go look at an old metal building full of dead motorcycles,” Barber says.