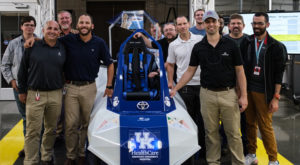 When Toyota Motor North America and Toyota Motor Manufacturing, Kentucky joined forces with the University of Kentucky football team at Lexington and Kentucky Children’s Hospital, a mobility project was born.

It culminated in an innovative high-tech pushcart that allowed several of the hospital’s young patients to participate in the schools’ home football games.

“This project was the result of a challenge to all of TMMK’s engineers from Susan Elkington, our plant president,” said Matt Kubarek, the lead engineer on the project and a manager in TMMK’s stamping department.

“We wanted to utilize our engineering skills and expertise in a way that could impact the community in a positive way. We landed on a unique and exciting opportunity for a child to lead the football team into the stadium — a child who otherwise might not be able to attend the game at all.”

The TMMK engineers leaned heavily on the expertise of TMNA’s PEMC Tilt Lab, an engineering think tank for designing and testing new ideas. Together, they incorporated input from the hospital, as well as some university engineering students.

The challenge was to construct a cart with interactive features that would also be safe for a child battling a health condition. Highlights include custom suspension, racing seat with seat belt, paper-airplane shaped roof to offer protection from the elements and GoPro cameras to record the experience so that the child could relive the day over and over again.

“I though pairing passionate students with the engineers from Toyota could really impact their careers,” said Nelson Akafuah, associate director of the UK Institute of Research for Technology Development.

“Talent that I never saw in class started to emerge when they interacted with the engineers. The more we can give students this type of exposure, the better engineers we will produce.”

Ultimately, this effort was all about the children, helping hospital bound children have freedom of movement.

“I am thankful and humbled by the generosity of our friends at Toyota, the ingenuity of our engineering students and the dedication of the UK football team,” said Dr. Scottie Day, physician-in-chief at Kentucky Children’s Hospital.

Toyota Motor Manufacturing, Kentucky has the annual capacity of producing 550,000 vehicles and more than 600,000 engines. Since 1988, more than 11 million vehicles have rolled off its assembly lines in Georgetown, where employment is more than 8,000. It produces the Camry, Camry Hybrid, Avalon, Avalon Hybrid and Lexus ES 350, as well as four-cylinder and V-6 engines.

The TMNA Production Engineering and Manufacturing Center, in Georgetown, opened in 2017. The 235,000-square-foot center houses approximately 600 engineers who innovate and problem solve the next generation of manufacturing technology solutions.