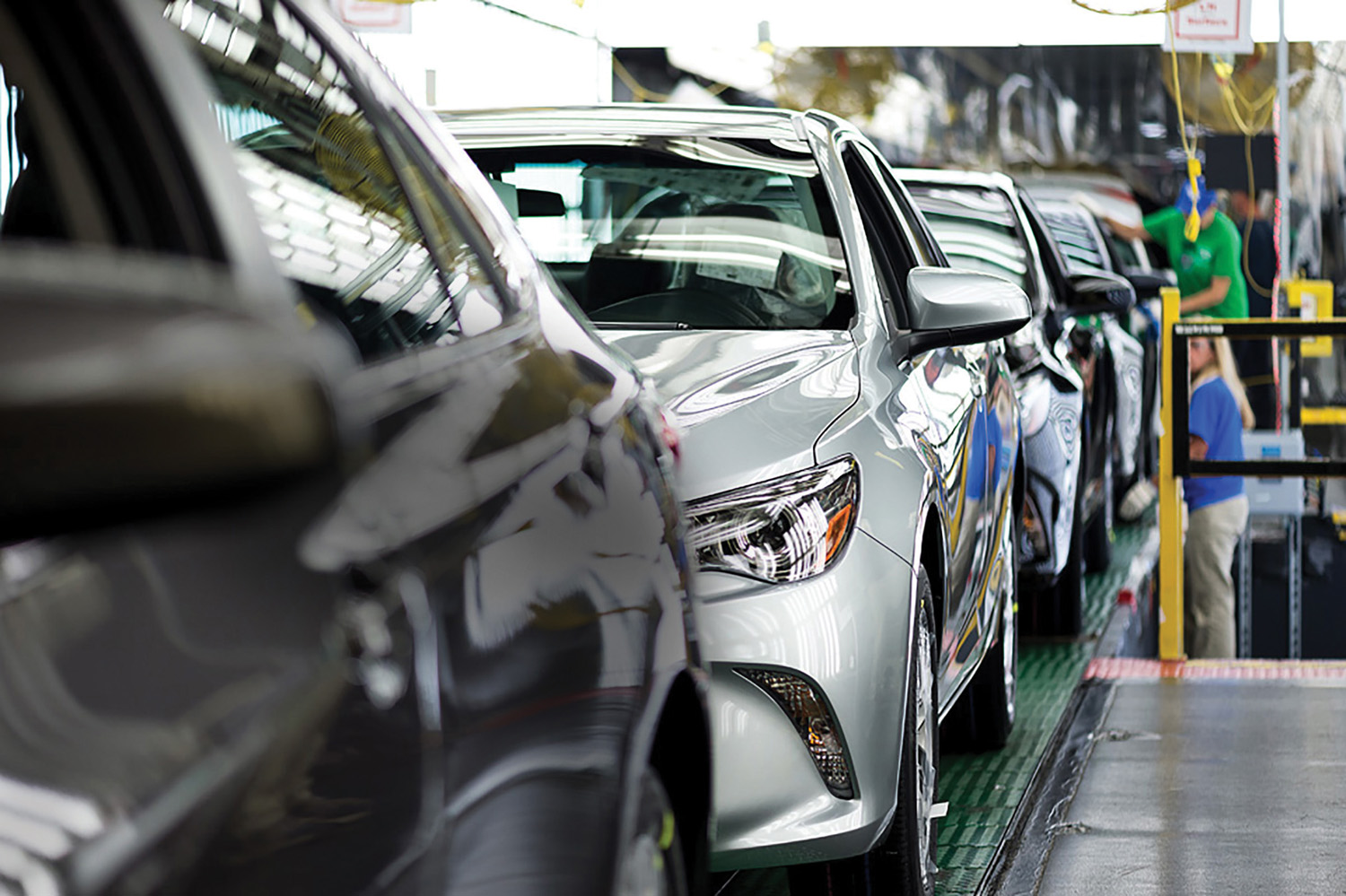 A life-size statue of a thoroughbred racehorse stands outside the Toyota Visitor Center in Georgetown, Kentucky — a gracious reminder of what made the state’s Bluegrass region so famous.

Auto manufacturers get a sizeable piece of state and local subsidies from traditional car-making states like Michigan, along with newer ones including Kentucky, Georgia and Mississippi in the Southeastern Automotive Corridor.

Toyota has received about $300 million in state and local tax breaks since opening its Georgetown plant, according to Washington, D.C.-based Governing — a media platform covering politics, policy and management for state and local government leaders.

Ford got $240 million in state and local subsidies in Kentucky to support two assembly plants in Louisville that build small and large SUVs and heavy-duty pickup trucks.

A recent study by the Center for Automotive Research found that every Toyota job in Kentucky creates nearly three more across the Commonwealth. As of 2015, Toyota’s workforce made up 1.3 percent of the state’s total employment, and its payroll of more than $1.9 billion accounted for 1.6 percent of Kentucky’s total compensation.

Only in recent decades has Kentucky become a top auto manufacturing state, yet its roots in the industry go back to 1913 when the Model T rolled off a Ford assembly line in Louisville.

Kentucky’s Cabinet for Economic Development Secretary Terry Gill says incentives are one of multiple factors that are considered in attracting and growing automotive jobs and investments.

In 2016, Kentucky made 70 automotive-related announcements totaling nearly $935 million in new investments. In addition, the state welcomed suppliers from Thailand, India and South Africa.  Gill says those nations are not traditionally associated with the auto industry, but represent a new wave for the industry and global commerce.

“Incentives play a role in maintaining that momentum by leveling the playing field against competitor states, particularly those with larger populations, ” Gill explains. “However, they usually come into play when a company or site-selection consultant has already narrowed the field to a handful of finalist locations.”

As part of a $7.9 million investment in a new Maysville, Kentucky production facility in 2016, MACA Plastics received a $33, 000 KEIA award to renovate a 122, 600-square-foot, previously vacant facility. The company also committed to creating 156 new jobs at the plant, which supplies components to the automotive industry.

“The competition between states to win automotive projects has been strong for decades, and that will continue as the industry changes and embraces innovative ideas, ” Gill adds.

Glenn McCullough, executive director of the Mississippi Development Authority, says Mississippi considers the size of the investment and the number of new jobs to be created when customizing an incentive package for new or expanding economic development projects.

Typically, the value of statutory incentives is based on the number of new jobs to be created or the amount of the investment. For instance, the Jobs Tax Credit provides a state income tax credit equal to a percentage of payroll for each newly created job.

In addition, Mississippi offers the Advantage Jobs Program, which provides a cash rebate of the Mississippi income tax withheld from employees of an eligible business for up to 10 years. The rebate is equal to 90 percent of the actual income withheld for employees with new, direct jobs.

Incentives in Mississippi range from statutory incentives, including tax credits and exemptions, to discretionary incentives, which may be provided based on the specific needs of the project.

Says McCullough: “Once a site has been selected and specific needs related to the site and the projects are identified, Mississippi can provide a customized incentives package including discretionary incentives, to assist in meeting those needs associated with the project.”

The package may include grants for site improvements, infrastructure, improvements, relocation assistance and workforce training. Property tax abatements are made available to new and expanding projects, which are determined by the local jurisdictions.

According to Good Jobs First, a nonprofit resource center promoting accountability in economic development based in Washington D.C., Mississippi gave more than $1.6 billion in total to bring Nissan and Toyota assembly plants to the state.

Mississippi has a variety of grant programs that may be used to address a project’s needs, which may include building improvements, equipment relocation and more.

Mississippi’s Research and Development Skills Tax Credit provides a business locating in Mississippi with an income tax credit of up to $1, 000 per year for a five-year period for any full-time position requiring research or development skills. This credit may be combined with other credits to offset up to 50 percent of the business’ state income tax liability, and may be carried forward for up to five years from the original date the credit was earned.

Georgia is also an integral part of the rapidly expanding Southeastern Automotive Corridor. According to Good Jobs First, Georgia won a Kia Motors plant with more than $400 million in subsidies.

In 2016, Georgia was ranked the No. 1 state in the nation in which to do business for the fourth consecutive year by Site Selection magazine. Editor-in-chief Mark Arend says this top ranking is based on where corporate expansion projects are occurring and where investors say they want to commit their capital long term.

Incentives are competitive, but just a piece of what Georgia has to offer companies that relocate or expand here, observes Mike Grundmann, director of advanced manufacturing at Georgia Department of Economic Development.

Georgia’s tax credit programs are designed to reduce or eliminate a company’s state corporate income tax for several years. Georgia’s tax exemptions help companies reduce up-front cost on business purchases and maintain healthy product inventory. Tax exemptions include sales tax and use tax exemption. Many types of machinery and equipment are exempt from both state and local sales taxes. Together, this amounts to a 5-8 percent savings on purchases.

Along with tax incentives, Quick Start, Georgia’s top ranking workforce training initiative, is free to any qualified company, whether new to Georgia, expanding a workforce in the state or adding new technology to stay competitive.

The state also offers a sales and use tax exemption when buying, repairing or replacing machinery and equipment that is used for the primary purpose of reducing or eliminating air or water pollution.

In 2013, the Energy Used in Manufacturing exemptions started, making all of the energy that can be connected in some way to the production of tangible property exempt from all sales and use taxation except for educational purposes.

Grundmann says Georgia’s R&D credit is considered one of the best in the nation. It can be used against 50 percent of a company’s state tax liability after all other tax credits have been applied. Any excess R&D credits can then be applied to the company’s state payroll withholdings.

Sentury Tire, the fifth-largest tire manufacturer in China, is an example of a company that recently established its operations in Georgia, creating more than 1, 000 jobs and investing $530 million in a car and light truck tire manufacturing facility in LaGrange.

The company is eligible for a variety of incentives including a $7 million Regional Economic Business Assistance grant. The grant may be used to finance various fixed-asset needs of a company, including infrastructure, real estate acquisition, construction, machinery and equipment.

As with other states, Georgia’s counties and municipalities also play a key role.

“Economic development is a team sport, ” Grundmann says. “We wouldn’t be as successful as we are without our local economic development partners. Communities at the local level may offer, for example, property tax abatement and discretionary incentives.”

Using incentives effectively to make certain they make the desired impact is paramount. Governing urges states to attract business “without giving away the store” and be careful to get value for the taxpayers’ money. Incentive programs are necessary to create jobs and tax revenue. Yet bad investments leave less money for education, health care, infrastructure and other critical needs.

Occasionally “buyer’s remorse” sets in, a sense of regret after closing an incentive deal. For example, in Alabama recently, officials in Northport questioned a $1.5 million payment that’s part of an earlier $100 million incentive package authorized for expanding the Mercedes-Benz plant in Vance.

A growing number of states are exploring how to provide incentives in the most responsible manner, according to the Corporation for Enterprise Development, a national nonprofit dedicated to expanding economic opportunity for low-income citizens.  The agency notes that Georgia rewards investment in poorer counties more than in richer counties — an example of a win-win situation for each player in the incentives game.