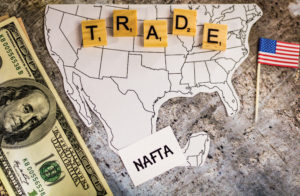 After press time for the print edition of Southern Automotive Alliance’s October-November issue, Canada signed off on the new U.S.-Mexico-Canada Agreement or USMCA. Earlier editions of the online version of the story reflected the reality prior to Sept. 30. This story has been updated to reflect the current status of the agreement.

The new trade agreement to replace/revise the North American Free Trade Agreement between the U.S., Mexico and Canada, has been worked out as the White House and Mexican leaders announced in late August they had reached a deal, and Canada, the other partner in NAFTA, signed off on the trilateral agreement Sept. 30.

Still, some elements of trade that affect the automotive sector remain unclear. Car companies are also watching to see if anything will come of a European Union proposal to eliminate tariffs on vehicles and other industrial goods if the United States agrees to do the same.

“The industry is hopeful that any changes to NAFTA auto rules of origin continue to strike the right balance by incentivizing production and investment in North America while keeping new vehicles affordable for more Americans.”

Kristin Dziczek, vice president at the Center For Automotive Research, a nonprofit research organization in Ann Arbor, Mich., says that when it comes to the NAFTA issue, modernizing NAFTA won’t be easy and the “the devil is in fact in the details here in many, many ways. “

Dziczek says auto makers are “largely confused and are just as much in the dark as the rest of us are. I think largely they feel that they have dodged a bullet,” adding that there is some relief that the end of uncertainty may be near.”

“About half of the cars and parts that are imported to the United States come from our NAFTA partners so if you can get Canada and Mexico exempt from any more tariffs, then the outcome is negative but not as negative as it would have been.”

New Hoops To Jump Through

As for NAFTA, Dziczek says, “What we know from the outlines that we have … that the deal is really not all that different from what it was last spring.”

But, she says, “There are different hoops to jump through than we had before.” And it may take a while to work through those hoops.

“In the current NAFTA, the one in place now, there is a list of parts and you have at least 62.5 percent of that list of parts come from North America in order to be in compliance or conforming to NAFTA rules,” she says.

According to Dziczek, close to 100 percent of cars and 80 percent of parts that come to the United States conform to existing NAFTA rules. “That 62.5 percent, which is the highest regional value content of any U.S. trade agreement, car companies and suppliers are largely conforming to that,” she says.

But still, she says, “The new rules have a bunch of hoops to jump through that are different. One of the criticisms of NAFTA was that that list of parts was not very modern.  It included stuff that we don’t put in cars anymore like cassette decks and distributor caps.

“The content of vehicles has changed and evolved over time and the trade codes haven’t and so they wanted to come up with a system that allowed parts content to change as the vehicles changed. So there is no set list anymore, there are different categories of parts,” she says, adding that there are three rules governing the agreement.”

Rule No. 1 is that 75 percent of the parts for the vehicle will have to come from North America, Dziczek says.

Rule No. 2, according to Dziczek, is that at least 70 percent of steel and aluminum (and potentially glass as well) would have to come from North America “so you can’t use Chinese steel to make your cars in the United States or in Mexico or Canada.”

The third rule, she says, is that a certain percentage of the vehicle’s value has to be created by workers who earn at least $16 an hour, which has been set as the median North American wage.

“We are not exactly sure how that is going to work,” Dziczek says. “We don’t know if that is at the company level, the plant level, the state level or what – the unit of analysis is not clear.”

Also, she points out, Mexico received a side letter that addressed two different points.

“If the U.S. puts in additional tariffs on imported cars and parts under the 232 investigation (national security concerns) that is ongoing, Mexico has a side agreement that says if you do that, a large majority of what we do will be exempt from those tariffs,” she says.

“The other part or side letter is if the United States were to raise its tariff rate with the rest of the world which now is 2.5 percent for cars and parts and 25 percent for trucks, Mexico would be grandfathered in with a large percentage of their output being subjected to the existing 2.5 and 25 percent tariffs on trucks. So they have gotten an agreement to be exempt from future tariff action.”

The NAFTA and tariff issues can have a serious impact on the South, where auto makers have plants spread across the area, including Toyota in Lexington, Kentucky and Huntsville, Alabama; Mercedes in Vance, Alabam, Honda in Lincoln, Alabama, Kia in West Point, Georgia, Hyundai in Montgomery, Alabama, Nissan in Smyrna, Tennesse, and Canton, Mississippi, BMW in Spartanburg, South Carolina, and the huge new Volvo plant outside Charleston, South Carolina.

The Spartanburg plant is BMW’s biggest in the world. It has helped draw more than 200 companies from two dozen countries to Spartanburg County. And the German company is now the largest exporter of cars made in the United States, turning the port of Charleston into a hub for global trade.

“I can’t tell you that an X percentage of a tariff will have a Y dollar effect on the cost of a car,” McDermott says. “But if we are thinking about South Carolina, here is how we would put this into perspective.

“Think about exports. Exports to Gross Domestic Product in South Carolina is 15 percent,” McDermott says. To put that into perspective, according to 2017 numbers from the department of commerce of the U.S., South Carolina depends more on exports than most other auto-making states in the South.

McDermott says South Carolina’s top export countries are China, Canada, Germany, Mexico and the United Kingdom. The highest growth in the past few years has been in exports to Mexico.

“The top exports that come from South Carolina are motor vehicles, aircraft, industrial machinery, rubber and electrical machinery. Don’t forget we have the tire companies. In South Carolina one out of every four jobs depends on international trade,” according to McDermott.

Of course, with two of the top export markets for South Carolina being Canada and Mexico, the NAFTA issue is bothersome.

“The whole Southern region is heavily impacted by globalization,” McDermott says. “Ten percent or more of its economy comes from direct imports, and if you are looking at global value chains, and if you look at indirect exports, it is probably double that.”

“So when you get into these tariff discussions,” McDermott says, “South Carolina is sitting in the cross hairs because when you look at big, big products, like BMWs, 80 percent of the exported cars go through the Charleston port.

“Now in terms of NAFTA, if you screw around with NAFTA too much, what is really going to hurt is you are going to see an increase in the price of cars. With cars you can’t do global sourcing; it is regional sourcing, usually within a 400-mile radius because you have a lot of just-in-time delivery.

“In the South, what they are worried about more is selling into Mexico and Canada. We make a lot of tires that go to Mexico. We know that Canada and Mexico have been increasingly important markets for South Carolina. We know a lot of that is related to manufacturing, particularly auto systems manufacturing.”

The auto industry has been adding jobs in the United States for several years. In July, more than 972,000 people worked for car and parts companies, 40,000 more than a year earlier, according to the Bureau of Labor Statistics. Manufacturers have added more than 300,000 jobs since 2009, many of them in the South.

But, says Dziczek, that may change.

’The main takeaway so far is there is no giant influx of jobs coming into the U.S.,’’ she says.

Industry analysts say consumers might be pulling back on spending because of tighter credit conditions and more expensive vehicles and the new agreement will push production costs higher on foreign products — parts and vehicles — which, eventually, will be paid by American consumers.