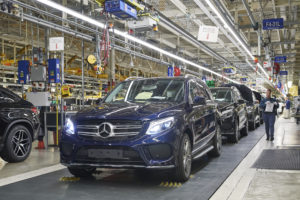 Though it comes with an asterisk, Alabama Commerce Secretary Greg Canfield shared the news this week that Alabama’s first quarter auto exports to China were up a startling 170 percent compared to a year ago.

Canfield, discussing Alabama exports with the news agency Bloomberg, said that the state’s overall exports to China in the first quarter of 2020 grew 45 percent, to $534 million. “By far our largest exporter on the automobile side comes from Mercedes,” Canfield said.

The asterisk arises from the fact that Alabama’s 2019 exports with China were somewhat depressed, thanks to trade tensions between that country and the U.S. Alabama saw trade with China decrease 26 percent in 2019.

Mercedes-Benz U.S. International in Tuscaloosa, like most automakers in the South, has seen production interruptions since the beginning of the Covid-19 pandemic.

Daimler AG, parent company of Mercedes-Benz, reiterated its goal this week of producing an all-electric version of its Mercedes S-Class sedan by next year, though the company has not indicated when the U.S. release might be.

Chief Executive Officer Ola Kallenius also aims to make all the company’s factories carbon-neutral by the end of 2022.