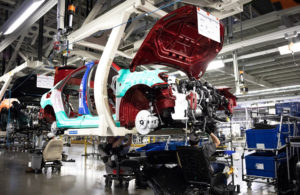 “It’s gratifying to me that our team is back to work and able to mark yet another key milestone since the opening of VW’s Chattanooga plant,” said Tom du Plessis, president and CEO of Volkswagen Chattanooga.

The plant has been producing the Passat since 2011, with the 2012 model specifically designed for the North American market — larger than the European vehicles with more leg room and trunk space. Nine years later, building on the brand’s copious amounts of interior space and creature comforts, the 2020 Passat offers a bolder design, upgraded technology and enhanced access to convenience and driver-assistance features.

It is available with a starting price of $22,995 for the Passat S. The vehicle has a 2.0-liter turbocharged and direct-injection TSI® four-cylinder engine that makes 174 horsepower and 206 pound-feet of torque, which is paired with a 6-speed automatic transmission on all models.

Volkswagen Chattanooga also will be the manufacturer’s North American base for manufacturing electric vehicles, representing an investment of approximately $800 million, with production expected to begin in 2022.