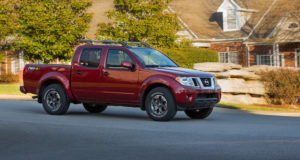 Nissan revealed the 2020 Frontier in early February, sporting an all-new, powerful 3.8-liter direct injection V6 engine and all-new 9-speed transmission, both of which will be key to the next generation, all-new Frontier coming soon.

The 2020 Frontier is the last model year of the current generation. It goes on sale this spring and it packs some surprises.

The all-new engine in the 2020 Frontier is using 93 percent new or redesigned parts, and the powerplant underwent extensive testing in North America. The engine will be assembled at Nissan’s advanced engine facility in Decherd, Tennessee, next to the full-size Titan pickup’s 5.6-liter Endurance V8.

Along with the 49-horsepower improvement over the previous Frontier V6, fuel economy is expected to increase. Contributing to the 2020 Frontier’s improved acceleration is its new automatic transmission designed to maximize powertrain efficiency.

“From its roots tracing back more than 60 years to the current model, Frontier has had a lasting impact on the compact and mid-size truck segments in North America,” Castro said.

The Frontier is one of the vehicles made at the Nissan Vehicle Assembly Plant in Canton, Mississippi. More than 4 million vehicles have rolled off the assembly lines at Canton. Its 6,000 employees build the Altima, Titan, Titan XD, NV Cargo, NV Passenger, Frontier King Cab, Frontier Crew Cab and Murano vehicles.