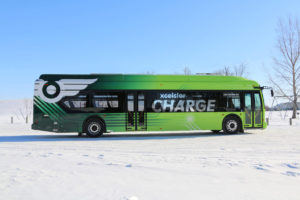 CBFs are compacts that companies enter into with their workforce and community representatives to ensure fairness in hiring, safety and environmental stewardship.

New Flyer, based in Winnipeg, Canada, has a major bus assembly plant in Anniston, Alabama that employs 700 workers.

“New Flyer remains committed to ongoing career development for people of all walks of life, including veterans, women, people of color, people with differing abilities, and underrepresented and underserved individuals in the field of advanced manufacturing,” said Chris Stoddart, president of New Flyer. “We delivered nearly 140,000 hours of training to our team in 2019 — but training alone is not enough. We recognized a more holistic approach was needed to support the well-being of our team and communities, and appreciate the greater compliance, accountability and action that comes from our CBF. We are proud of this work, and our partnership with TDC.”

Negotiations between New Flyer and the Transportation Diversity Council were challenged by Alabama minority groups shortly after it was announced that a CBA was being worked out, following Martin Luther King Jr. Day on January 20.

It opened its Vehicle Innovation Center in Anniston, Alabama in 2017. The center’s mission is to advance bus and coach technology through sustainable research and development, innovation, progressive manufacturing and bold thinking. It has a number of interactive exhibits, simulation and hands-on experiences at its facility.