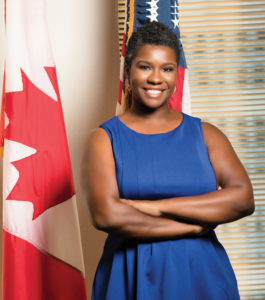 There still is a lot of ground to cover before the United States-Mexico-Canada Agreement (USMCA), the revamped North American Free Trade Agreement (NAFTA), goes into effect and questions remain about exactly how the deal will impact the auto manufacturing world.

But most industry observers say the agreement brings a key ingredient to the automotive business: a degree of certainty.

“What businesses need more than anything else is a degree of certainty,” says Consul General Nadia Theodore, Head of Mission, Canada, a veteran treaty negotiator now based in Atlanta.

“They create their business models based on rules that they know exist and they need to know that those rules are going to exist for the next 20 years for their business cycles. So we know that this modernization means that businesses can be certain that they
have duty-free access, that the rules of engagement have not changed and they can continue to do business with their friends and partners in all three countries as they did before,” she says.

Theodore joined the Canadian civil service in 2000 and has made a career in the Trade Agreement and Negotiations Branch of Global Affairs, holding leadership positions on several recent and major trade initiatives of Global Affairs Canada, including serving as
one of the two Deputy Chief Negotiators for the Comprehensive and Progressive
Agreement for Trans-Pacific Partnership and as the Executive Director of Canada’s Secretariat for the Canada-European Union Comprehensive Economic and Trade Agreement.

With more than 10 years of trade policy experience, Theodore’s appointment to the Atlanta post came as Canada, Mexico and the United States launched negotiations to modernize
NAFTA. That said, one of the key roles of the Consulate General of Canada in Atlanta is to serve Canadian interests across the six states of Alabama, Georgia, Mississippi, North Carolina, South Carolina and Tennessee, all of which are heavily involved in the automotive industry sector which is impacted by USMCA.

Theodore says the recent negotiations were finished very quickly, as trade agreements go.
“My background is in trade policy and negotiation so I can tell you that the pace of the negotiation was quite unprecedented, frankly. In my view it really was the leadership of Canada and the United States and Mexico and the commitment to getting it done that
allowed us to get it over the finishing line this fall,” she says.

“In terms of next steps, what happens after folks conclude the actual text of the agreement, is all three countries will now finalize all the technical issues, do the legal
review of the agreement in English, French and Spanish and then, each of the parties have to proceed to the domestic procedures in order to have the authority to sign and ratify the
agreement,” she says.

Theodore adds, “From Canada’s point of view, we are certainly committed to signing and have this agreement come into force as soon as possible.”

Theodore says she does not anticipate any problems with ratifying the treaty.

“What I will say is that during the modernization of NAFTA, now USMCA, all political parties in Canada really understood the benefits of modernizing NAFTA. All political parties in Canada really understood that nearly nine million U.S. jobs depend on the two-way
trade investment with Canada, and that really spoke to the fact that Canada and the United States have been the most successful economic partnership in the world and it is largely due to this trade agreement,” she says.

In Mexico, the legislative process to ratify the deal and enact the enabling legislation is expected to be fairly quick. Agreement and release deadlines were timed to get the USMCA approved by outgoing Mexican President Enrique Peña Nieto who left office Dec. 1.
In the U.S., the Congress is considering the USMCA under the Trade Promotion Authority (TPA) rules which set out milestones that are required to “fast track” the legislation, which means it will receive an up or down vote in the Congress without amendments. A critical milestone is that the TPA requires a report on the economic impact of the trade deal from the U.S. International Trade Commission (ITC). That report is due within 105 days after
the agreement is signed.

According to a report by the Center for Automotive Research (CAR) in Ann Arbor, Michigan, Republicans in Congress are considering trying to pass the bills this year during a lame duck session of Congress, but it is not certain that the ITC report would be available
that quickly. The Congress could vote to modify the rules and not require the ITC report for passage to meet a more aggressive timeline. Without strong bipartisan support for the deal, the normal timeline is more likely, and the 116th Congress that takes office in January 2019 will likely be the one that considers the agreement, according to CAR.

“While there is a lot that is different in this new agreement about automotive trade, there are some things that remain the same,” CAR says. “It is also important to keep in mind that while the text offers greater certainty about the future of North American automotive
production, trade, and investments, the USMCA still must be signed, ratified, and the enabling legislation must be passed in each of the three countries before the agreement can go into effect on the target date of 1 January 2020.

The CAR analysis also says there are important changes in the document concerning the auto industry.

“Instead of the 62.5 percent North American content hurdle in NAFTA, the USMCA sets forth a regional value content (RVC) threshold for vehicles and three categories of automotive parts: core, principal, and complementary. There is a new RVC for North American steel and aluminum content and a new labor value content (LVC) rule that states that 40 percent of a passenger vehicle and 45 percent of a pickup or cargo vehicle must be made by hourly workers who earn a wage of $16 an hour or more. Automakers can earn up to 10 percent credit toward the LVC from R&D and information technology work done in the region where the production takes place, and a 5 percent credit toward the LVC for assembling the vehicle in a high-wage region in North America.”

“Back home in Canada,” Theodore says, “we really support the idea of strengthening the Canada-US-Mexico trade relationship and protecting the supply chains that have really allowed us to compete and win globally with the rest of the world, which then results in higher wages, and better standards of living for all of our citizens in all three countries.

“A lot of people don’t know that the U.S. actually exports more to Canada than it does to China, Japan, and the UK all combined and beyond that, a lot of people don’t know that it is not just U.S. companies selling finished products to Canada. The trade actually includes components of parts that move across our borders back and forth as part of this highly efficient supply chain, and that is part of the reason that in the automotive sector you
see these automotive manufacturing companies — the Kias, the Mercedes’, the BMWs, coming here to the Southeast to take advantage of those supply chains that we have created among the three countries.

“The next thing on our plates would be to return to the 232 tariff on steel and aluminum, which cancels out much of the good that comes from the agreement on USMCA, especially in the auto industry,” Theodore says.

Last February the U.S. Department of Commerce concluded that the quantities and circumstances of steel and aluminum imports “threaten to impair the national security,” as
defined by Section 232 of the Trade Expansion Act of 1962. The reports found that United States steel imports were nearly four times the nation’s exports, and that aluminum imports had risen to 90 percent of total demand for primary aluminum.

The Commerce Department recommended that President Trump take action to protect the viability of the nation’s steel and aluminum industries by imposing tariffs on non-North American imports. The Section 232 auto and parts tariffs are not yet in effect. However, the European Union and Japan have won a reprieve from the impact of the tariffs while they work to negotiate new trade deals with the United States. If the EU and Japan deals lead to a more long-term exemption such as the ones negotiated by Canada and Mexico, the overall impact of these potential tariffs will be greatly diminished. Most of the USMCA rules have a three-year transition period, and if all goes smoothly in the three countries’
ratification process, the target effective date is Jan. 1, 2020.

According to CAR, the current Section 232 steel and aluminum tariffs and the ongoing Section 301 trade dispute with China is already raising prices for consumers and suppliers — including those that rely on domestically-sourced inputs due to increased demand for these sources. A Section 232 auto and parts tariff that exempts Canada and Mexico is better for the U.S. auto industry than one that does not, according to CAR.

However, the potential for there to be even more tariffs will likely cause changes in the North American industry. CAR’s preliminary analysis of the imposition of Section 232 tariffs shows that widespread imposition will be a net negative for the U.S. industry, the overall economy regarding employment and gross domestic product, and will raise consumer prices even further.