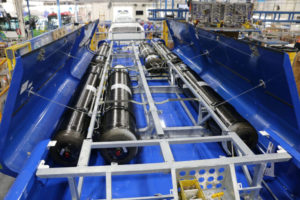 The new buses will replace older, end-of-life diesel vehicles with low-emission and more efficient buses. Since 1994, New Flyer, alongside its NFI sister companies, has delivered more than 1,350 buses to Miami-Dade Transit, including more than 300 CNG transit buses over the last two years.

“We are proud to continue supporting Miami-Dade Transit with an additional fleet of high-quality transit buses that deliver a safe, clean and reliable ridership experience,” said Chris Stoddart, president of New Flyer of America.

“Replacing the county’s aging bus fleet with cleaner and more fuel-efficient vehicles, such as compressed natural gas buses, has been one of my main priorities and represents a key milestone for public transportation in Miami-Dade,” said Miami-Dade County Mayor Carlos Gimenez. “By upgrading the county’s Metrobus fleet with CNG buses, we’re realizing a cost-effective approach to lowering our fuel and maintenance costs; and at the same time, it allows us to receive Renewable Fuel Standard Credit through the Environmental Protection Agency providing additional fuel cost savings to Miami-Dade County.”

New Flyer has been an innovator in mobility for nearly 90 years. Founded in 1930, New Flyer is now the largest transit bus manufacturer in North America, with fabrication, manufacturing and service centers in the United States and Canada. Continuing that innovation, the company opened the Vehicle Innovation Center in Anniston, Alabama in 2017, where, with its partner Motor Coach Industries, its researchers are exploring and advancing bus technology.