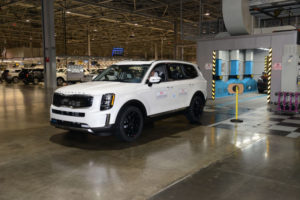 West Point-based KMMG started mass production in November 2009 and today produces more than 40 percent of all Kia vehicles sold in the United States. The plant, which builds  more than 340,000 vehicles a year, is home to the Telluride SUV, Sorento CUV and Optima midsize sedan and represents an investment of more than $1.1 billion. More than 90 percent of the vehicles assembled at the plant are destined for dealerships in America.

“Producing three million vehicles in less than 10 years is another example of the commitment and results of the KMMG team’s ‘One System, One Team’ philosophy,” said KMMG President and CEO Jangsoo (Jason) Shin. “The world-class quality that goes into every Telluride, Sorento and Optima we build is a direct result of the hard work and dedication of our team members, and today we salute their commitment to excellence.”

KMMG will celebrate its 10th year of production later this year. It is the first manufacturing site in North America for Kia Motors Corp., based in Seoul, Korea.