Hyundai Motor Manufacturing Alabama’s employees and plant leadership donated more than $335,000 to United Way of Alabama in mid-November. The plant’s nearly 3,000 workers pledged $265,600 and the company added another $70,000 to present to United Way for its efforts across the River Region and the state of Alabama. 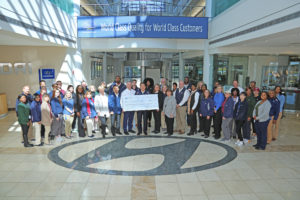 “You, HMMA, are change agents who cannot leave well enough alone because you believe that you can always make things better,” said River Region United Way President Jimmy Hill. “I’m proud to share this common belief that together we can make life better for everyone.”