Hyundai Motor Manufacturing of Alabama announced yesterday that it will add a new vehicle to the production lineup at its Montgomery factory, part of a $410 million expansion project that will create 200 jobs. 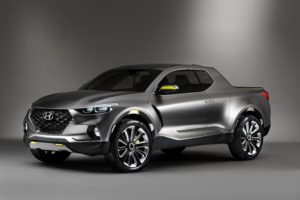 Alabama workers will assemble the Santa Cruz compact utility vehicle at the facility beginning in 2021. Hyundai says the investment will create an additional 230,000 square feet of space in the stamping, welding and parts processing areas of the manufacturing complex.

Hyundai intends to begin filling the new positions being created by the latest expansion project during the second half of 2020.

Hyundai estimates that the expansion also will create another 1,000 jobs at supplier and distribution facilities.

“Bringing the Santa Cruz to HMMA demonstrates that Hyundai Motor Company is confident our more than 3,000 team members are ready to build a quality crossover for the U.S. market,” said Byungjin Jin, HMMA president and CEO.

Hyundai currently produces the Santa Fe SUV and the Sonata and Elantra sedans in Montgomery. The addition of the Santa Cruz will provide HMMA with greater flexibility to adjust product mix based on market demands.

HMMA, which launched vehicle production in May 2005, is the Montgomery area’s largest private manufacturer, with 2,900 full-time and 500 part-time employees. Since it opened, the Alabama plant has produced 4.5 million vehicles for the North American market, along with more than 6 million engines.

At present, economic development officials say Alabama is the fifth largest producer of cars and light trucks, and has more than 150 major auto suppliers and over 40,000 automotive manufacturing jobs.

“Alabama and Hyundai have developed a great partnership over the years, and it’s a testament to our special relationship that this world-class automaker is expanding once again in Montgomery,” said Alabama Governor Kay Ivey. “Hyundai’s new investment is giving more Alabama families an opportunity to earn a good living while also strengthening the state’s growing auto industry.”