Honda Manufacturing of Alabama LLC, last week, announced it has reached the 5 million mark for vehicle and engine production since its plant in Talladega County opened nearly 20 years ago.

The total output for 2019 is estimated at 351,708 minivans, SUVs and pickups, along with the V-6 engines that power them. 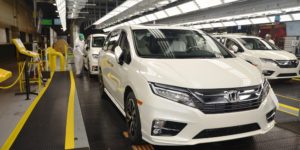 In Lincoln, Honda makes the Passport SUV, Pilot SUV, Odyssey minivan and Ridgeline pickup trucks, along with the V-6 engines. Cars.com recently named all four of Honda’s Alabama-made products to its Top 10 Most American-Made Vehicles list.

Recently the Economic Development Partnership of Alabama announced a study that outlined the company’s $12 billion impact, which represents 5.4 percent of the state’s gross domestic product, along with more than 45,000 jobs at the plant and its suppliers.

“What Honda has done in Alabama is truly remarkable,” said Greg Canfield, secretary of the Alabama Department of Commerce. “The company continues to raise the benchmark on production, efficiency and innovation here at home, while sending out popular, high-quality vehicles and engines to drivers across the U.S. and the world.”

The Alabama plant, which has 4.2 million square feet of space, is the sole global production source for each of the vehicles it produces. It employs more than 4.500 workers.

Since 1982, Honda has built 26.1 million cars and light trucks in the United States. It has vehicle production plants in Ohio, Indiana, South Carolina, North Carolina and Alabama. It produces parts and components in Ohio, Georgia and North Carolina.