Few things can hold a kid’s attention more than getting to drive a race car. But kids who participate in GreenpowerUSA’s Electric Car Challenge get to do just that and much more. And it’s not just about the excitement of motorsport – it’s the STEM principles they learn.

“It was so satisfying to build a car and run it,” says Chase Abbott, a rising ninth grader in the Academy of Science and Foreign Language in Huntsville City Schools. “We learned how to work as a team and it gave us confidence, too.” The team did pretty well with their gold and black electric car, under the tutelage of their 8th grade physical science teacher.

Aurora Esquivel, Chase’s mother, says the experience has spurred her son into pursuing several STEM opportunities, such as a Toyota program available at Calhoun Community College for eligible high school students. “GreenpowerUSA is such a great opportunity for him, and it has given him an idea of what he wants to do,” she says. “It really instilled confidence in his and his team’s ability to do this kind of thing. And the automotive industry is huge here.”

It definitely is. Not only is Huntsville home to Toyota Motor Manufacturing Alabama, where last year workers turned out about 700,000 engines, but Toyota and Mazda Motor Corp. also announced their pairing for a $1.6 billion joint assembly plant in Huntsville that will hire up to 4,000 workers. Polaris, in Huntsville-annexed Limestone County, builds off-road vehicles, and continues to add production lines and more workers. And that listing does not include the numerous automotive suppliers.

“Through the GreenpowerUSA Initiative, students are starting to become more interested in automotive manufacturing as well as automotive design,” says Drew Sparks, GreenpowerUSA vice president of academic affairs and GreenpowerUSA lead teacher for Huntsville City Schools. “Several of our students have gone on to school to be mechanics, automotive engineers, and several other fields. In some cases, students have been a part of various collegiate automotive programs at the post-secondary level.”

Students in Huntsville City Schools are among dozens of teams around the country who design, build and race their own electric cars through GreenpowerUSA, a 501(c) 3, STEM-based charity program that started in the United Kingdom as Greenpower Education Trust 20 years ago. About five years ago, Huntsville City Schools asked to begin the program here as well. It has grown by leaps and bounds, and there are teams all across the country – 350 teams in 21 states now, Sparks says. Alabama has the majority of teams.

“It has just exploded in a good way,” Sparks says. “We’re STEM based, and it gets kids involved at a young age.” As GreenpowerUSA lead teacher, he trains teachers in the summer for the program. “I’m like the athletic director for the program,” he says. “I also help with the curriculum.” Huntsville City Schools has dozens of teams.

The kit cars are made so that they can be taken down and put back together for each school year, and cars range, according to the competition category, from $2,000 to $5,000, Sparks says. Schools can purchase cars outright, or write grants, find sponsors, ask state and federal representatives and the community to help finance a car. The car will last a long time as long as the classes take care of it.

Each teacher who trains receives the Siemens Solid Edge 3D design program free, Sparks says. Siemens is a GreenpowerUSA title sponsor and technology partner that supports the GreenpowerUSA Electric Car Challenge across the U.S. and the UK. 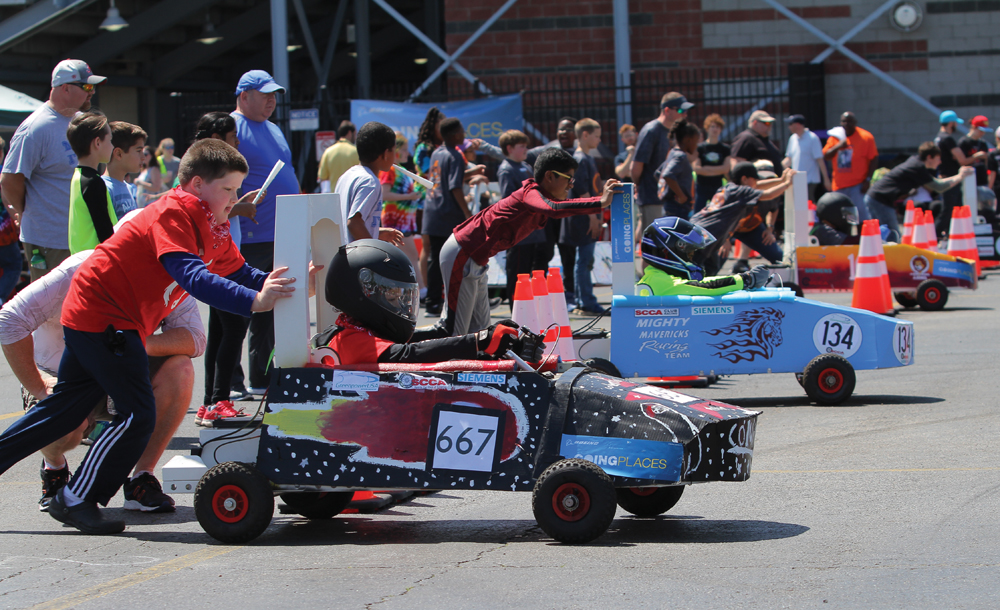 Older students, seventh to twelfth grades, compete in three levels of the Formula F-24 category and not only learn all of the above, advanced manufacturing and fabrication and get to race the car, but as part of the marketing part of the program, students present what they learn.  From goals to budget, business plan and more, students are subject to being interviewed on the spot on the presentation, Sparks says. Students also had to produce and edit a video to be sent out to sponsors via YouTube. The overall winner is determined by both the race and the presentation. “It’s like a football field for engineers,” Sparks says. There are three races per school year in middle and high school, and two for elementary students.

To ensure safety at all levels, the Sports Car Club of America, another sponsor, provides services and expertise in many ways, which includes club members staffing the corners of most races and running the scoring and timing. “They take completely over, using radios just like a pit crew,” he says. “It’s really exciting for everyone.”

GreenpowerUSA has other sponsors who work with its foundation in several capacities. Other sponsors include PPG Industries (which makes, among other things anti-ballistic glass for vehicles), and TCU Consulting, which helped integrate Greenpower racetracks in several schools in Huntsville.

Some teams across the country have raced at the Indianapolis Motor Speedway, and local teams will compete again at Barber Motorsports Park.

Whether students eventually enter the automotive industry or not, the program exposes them to many STEM possibilities, Sparks says. “We have a lot of kids who intend to explore STEM careers.  This program attracts students to aerodynamics, software, coding, 3D and more.” One student who has gone through the program is planning to study biomedical engineering and learn to make 3D prosthetics for wounded veterans, he says. Others decide to go into technical fields such as welding and machining. Either way, it opens up new possibilities.

“We tell students you are the owner of your future, and we’ll tailor it to you,” he says. “Many students have found their place in this program. The president of GreenpowerUSA says if we can just get kids excited for 1½ hours at school, they’ll be excited for the remainder of the day. If we do that, we’ve done our job.”