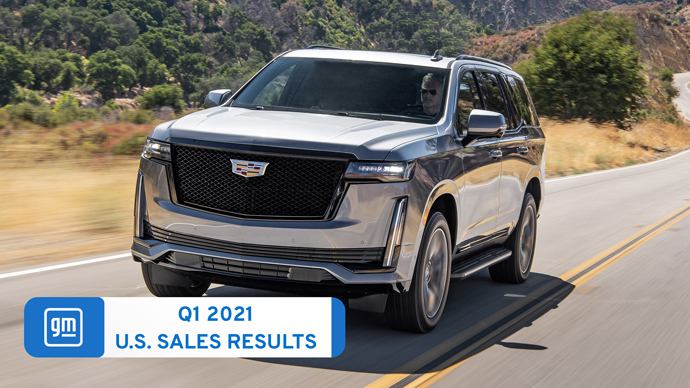 General Motors Co. has sold 642,250 vehicles in the United States in the first quarter of 2021, with retail deliveries up 19% and fleet sales down 35% year over year. Total sales were up 4% compared to a year ago.

“Sales are off to a strong start in 2021, we are operating our truck and full-size SUV plants at full capacity, and we plan to recover lost car and crossover production in the second half of the year where possible,” said Steve Carlisle, GM executive vice president and president, North America.

Cadillac deliveries were up 43% and market share was up 1.1%, according to J.D. Power PIN. The all-new Escalade saw a 127% year-over-year increase in retail deliveries. In addition, retail sales of Cadillac’s crossovers and luxury sedans were also exceptionally strong with the XT4 up 30%, the XT5 up 15%, the XT6 up 22% and the CT5 up 60%. The Escalade is made at GM’s plant in Arlington, Texas, and the XT5 and XT6 are both made at General Motor’s Spring Hill, Tennessee, plant.

GMC deliveries were up 23%, with the GMC Sierra delivering its best first-quarter retail sales ever, up 18%. Other GMC models that had double-digit increases were the Acadia, up 33%; the Canyon, up 66%; the Yukon, up 79%; and the Yukon XL, up 56%. The Yukon and Yukon XL are both built at GM’s Arlington, Texas, plant and the Acadia is built at the Spring Hill, Tennessee, plant.

Buick deliveries were also up 43%, with the Encore GX continuing to be its best-selling nameplate. However, Buick also launched the redesigned 2021 Envision, which had its best first-quarter sales ever, with a sales increase of 51%. The Enclave also increased deliveries by 38%, with a refreshed 2022 model slated to go on sale later this year.

Sales to commercial and government customers were down 15% and rental sales were down 55% for GM, but GM estimates that it gained commercial market share on the strength of its truck deliveries, especially full-size Chevrolet and GMC SUVs, which were up 96%, and large vans, which were up 33%. In addition, the Chevrolet Silverado medium-duty pickups were up 43%.

Like other automakers, GM reports that it has been impacted by the global semiconductor shortage. GM is building some vehicles without certain modules when necessary and they will be completed as soon as more semiconductors become available.