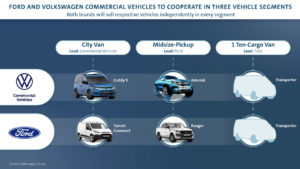 With an announcement datelined from both Dearborn, Michigan and Wolfsburg, Germany, Ford and Volkswagen announced Wednesday they would partner to build 8 million vehicles starting as early as 2021.

The two will collaborate on commercial vehicles, including a city van created and built by Volkswagen Commercial Vehicles and a 1-ton cargo van engineered by Ford. Plans also call for a VW medium pickup built on the Ford Ranger platform.

During the lifecycles of the products, the companies expect to produce up to a combined 8 million of the three commercial vehicles included in the deal.

“In light of the Covid-19 pandemic and its impacts on the global economy, more than ever it is vital to set up resilient alliances between strong companies,” said Volkswagen Group CEO Herbert Diess. “This collaboration will efficiently drive down development costs, allowing broader global distribution of electric and commercial vehicles, and enhance the positions of both companies.”

Ford and Volkswagen both have strong commercial van and pickup businesses around the world, including Ford’s Transit and Ranger and Volkswagen Commercial Vehicle’s Transporter, Crafter, Caddy and Amarok.

“This alliance comes at a time of tremendous enthusiasm about the intersection of increasingly intelligent, connected vehicles in an ever-smarter world,” said Ford CEO Jim Hackett.  “This creates a huge opportunity to innovate and solve many of the world’s transportation challenges and deliver extraordinary benefits to customers — even as companies need to be selective about how they use their cash.”

Over several years starting in 2023, Ford could deliver 600,000 electric vehicles atop the MEB architecture, designed to combine space and performance with electric drive. The vehicle, which will be designed and engineered by Ford in Cologne-Merkenich, will add another compelling nameplate to its own all-electric Mustang Mach-E, which will be introduced in 2021.

The Volkswagen/Ford alliance does not include cross-ownership between the companies, which will remain competitors in the marketplace. There’s no word yet on specific assembly assignments for Ford and VW plants in the South.