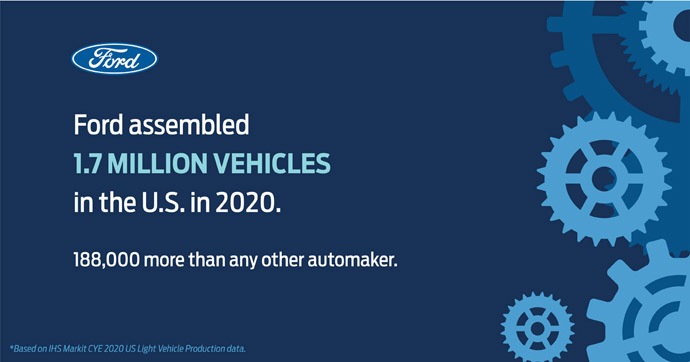 Ford Motor Co. has been declared the top automotive manufacturer in America in terms of production, according to IHS Markit 2020 light vehicle production and sales data. This is the third year in a row Ford has held this honor.

“The numbers confirm Ford’s leadership and commitment to American manufacturing and the U.S. economy. Not only is the auto industry the backbone of the U.S. economy, Ford is vital to it,” said Kumar Galhotra, president of the Americas and International Markets Group at Ford. “We are a proud supporter of American manufacturing — and we do back it up year after year, investing in our workforce and the country.”

In late 2019, Ford announced it would invest $2 billion in U.S. manufacturing, adding approximately 3,000 U.S. hourly jobs and retaining hundreds more. Part of these jobs are already in place in Michigan, where the company also invested $750 million to build the all-new Ford Bronco and Ranger, along with a modification center where those vehicles will be personalized for customers.

The investment is part of Ford’s commitment to invest $6 billion in its U.S. plants and create and retain 8,500 jobs in America as part of its current four-year contract with the United Auto Workers.

The company also has invested in the new Rouge Electric Vehicle Center, adjacent to its Dearborn Truck Plant in Michigan. The Rouge Electric Vehicle Center will assemble the electric F-150 currently being designed. The company is also investing $150 million in its Van Dyke Transmission Plant, in Michigan, retaining 225 jobs and transforming it into to a plant able to build e-motors and e-transaxles and $400 million at the Kansas City Assembly Plant, adding 150 jobs and building the all-new Ford F-150 and the all-new zero-emissions E-Transit.