Mazda revealed the look of the CX-50 on Monday, touting its off-road ability as a key driver in its design and function.

“Today we are excited to introduce the all-new, highly-anticipated CX-50 as the next chapter in Mazda’s story in North America,” said Jeff Guyton, president and CEO of Mazda North America Operations.

Produced at the Mazda Toyota Manufacturing plant in Huntsville, Alabama, the CX-50 joins the Toyota Corolla Cross, which was announced earlier this year and is already in production. Production on the CX-50 will start in early 2022.

“This thoughtfully engineered new crossover is uniquely Mazda. What I mean by that is that while statistics and measurements are important, we take a human-centric approach to design, where the bottom line of success is how drivers and passengers feel onboard,” said Guyton. “So, we have taken everything you have come to expect from our vehicles, including our signature driving dynamics and refined, sophisticated design, and applied them to a vehicle equipped for exploration on almost any terrain.”

Guyton added that the CX-50 is purposefully built for outdoor enthusiasts and active lifestyles. Arriving in dealerships next year, the CX-50 will come equipped with one of two powertrains — naturally aspirated and turbo-charged versions of Mazda’s SkyActiv-G 2.5-liter engine.

The driving dynamics are paired with design elements from Yasutake Tsuchida, Mazda’s senior director of design.

In designing the car, Tsuchida said, Mazda considered two questions: What does Mazda uniquely offer? And what do we in North America uniquely value? What Mazda found was that exploring the outdoors, getting away for the weekend and out of the city all rated high with Americans, especially during the pandemic.

With that knowledge, the CX-50 was designed to inspire drivers to find new places. “The CX-50 has a long and sleek profile with a visually higher ground clearance compared to typical SUVs, which also provided more vehicle space for the occupant. Also, reflecting our customers’ active lifestyle, the lower roofline and the wider opening rear doors have made it easier to load gear,” said Tsuchida. In addition, the rear cargo area was expanded to allow for longer cargo and the CX-50 comes with a panoramic moonroof, bringing the outdoors in.

In the future, Mazda plans to introduce a number of outdoor accessories to go with the CX-50. In addition, the company plans to launch an electrified version, including a hybrid-model. 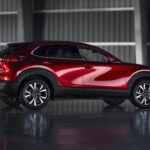 Erica Joiner West - October 7, 2021
Mazda North American Operations has announced that it will build the all-new CX-50 SUV at Mazda Toyota Manufacturing in Huntsville. The Mazda CX-50 will...