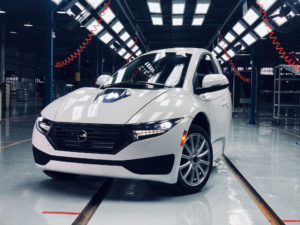 Electra Meccanica builds the small single-seat, three-wheeled Solo electric vehicle. The automaker has a contract manufacturing partner and strategic investor in Zongshen Industrial Group Co. Ltd. in Chongqing, China, where it currently builds the vehicle. Electra Meccanica says the  Zongshen facility would continue to make Solo EVs for the global market, as well as supplying knock-down kits for assembly in the United States.

The new U.S. facility would employ approximately 200 people and would build the Solo at the facility. The company hopes to narrow down its location choice by third quarter 2020. The company is requesting local and state incentives.

The company says a U.S. plant would help it capture a U.S. electric vehicle marketplace that is projected to comprise more than 30 percent of all passenger vehicle sales by 2040. Another advantage for a U.S. plant is reducing or potentially eliminating U.S. tariffs.

“This strategic initiative will not only allow us to limit uncertainties in the global supply chain, but also grow our talent pool of engineering resources and seize the tremendous market opportunities in the USA,” said Paul Rivera, Electra Meccanica’s chief executive, in a statement.

The Solo was launched in 2016. The vehicle is approximately 4 feet wide by 10 feet long.