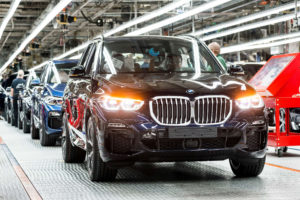 BMW Manufacturing in Spartanburg, South Carolina once again can boast leading the nation in automotive exports by value, according to the U.S. Department of Commerce.

The company has held that distinction now for six years.

The BMWs produced in South Carolina were exported through the Port of Charleston (nearly 195,000 units), and through five other southeastern ports: Savannah and Brunswick, Georgia; and Jacksonville, Miami and Everglades, Florida. More than 18,000 BMWs also were exported via rail.

“In addition to being the largest U.S. automotive exporter by value, our plant continues to be the largest facility in BMW’s global production network. These achievements are significant and clearly reinforce BMW’s ongoing commitment in the United States.”

The plant is on track to produce its five millionth BMW later this year.