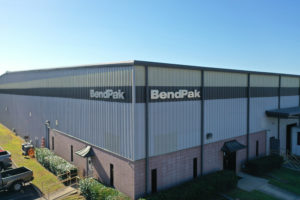 Automotive lift manufacturer BendPak has opened a 100,000-square-foot distribution center in Theodore, just over 10 miles from the Port of Mobile and the expanding APM Terminals container facilities there.

BendPak products are used in car dealerships and parking garages.

“Opening the Mobile distribution center represents our continued commitment to being the industry leader and best at serving our customers, and part of that commitment means reducing delivery times,” said Don Henthorn, president and founder of BendPak, based in Santa Paula, California. “This new facility brings our products geographically closer to our customers and that makes a huge difference.”

BendPak envisions the Mobile hub as a good access point for its eastern U.S. customers.

“Located in the heart of one of America’s largest logistic hotspots, the new fulfillment operation will offer next-day or two-day delivery to a large share of BendPak’s customer base on the eastern half of the U.S.,” the company and APM Terminals said in a written statement.

In addition to distribution facilities, BendPak anticipates adding a training center at the new location.

APM Terminals, which operates the Port’s container facilities, also praised the benefits of the Mobile location that attracted BendPak.

APM Terminals, which opened in Mobile in 2008, credits the Alabama State Port Authority’s Director Emeritus Jimmy Lyons for the vision to expand the port, and Harold adds:  “The ASPA will be deepening the Mobile harbor to 50 feet starting in 2021, to accommodate the largest vessels in the global fleet and ensure future logistics competitiveness for the port.”