Auto manufacturing technology is speeding ahead so quickly that it risks leaving some in the industry lagging behind, according to speakers at the Automotive Advanced Technology Summit in Birmingham May 8. They say the future of auto manufacturing is filled with both promises and challenges, and that at the moment it is difficult to decipher how everything might shake out.

“We’re in a time of flux right now,” says Greg Harris, an associate professor in Auburn University’s College of Engineering and director of the Southern Alliance for Advanced Vehicle Manufacturing. “Vehicles aren’t going to go away, but (the industry) is changing. … And it’s changing at a rapid pace. If you have not started on your digital journey, you’re already behind.”

The conference, put on by international firm Advanced Business Events, and a number of corporate, education and government partners, was held in conjunction with the Aerospace Innovative Technology Summit at the Birmingham Jefferson Convention Complex. Organizers expect the conference to return to Birmingham in 2021 and 2023.

Wednesday’s summit was filled with high-tech catch phrases such as plug-and-play functionality, integrated capabilities, data analytics, and machine-to-machine communications. Tom Shoupe, executive vice president and COO at Honda of America, says that success in auto manufacturing will increasingly be determined by how well manufacturers and their suppliers can incorporate all this new technology into the production process.

“We are at a crossroads for our industry,” Shoupe says. “The coming years will truly shape how we look at technology. It will make or break some companies and redefine what it means to work in this industry. It will take careful and strategic management, with one eye on ensuring that we’re meeting the needs of our customers today, and the other eye on preparing for the needs of tomorrow.”

Harris says part of the dilemma facing the industry is the lack of a consensus blueprint for the best way to move forward. He notes that was not the case with many of the major auto technology breakthroughs of the past, such as Ford’s use of the assembly line or Toyota’s innovative Production System with its emphasis on efficiency and logistics.

“Other companies could look at what Ford or Toyota did at the time and say, “That’s what we want to be like. Those are the things we want to do. Let’s copy that,’” Harris says. “But what do you do when you start talking about cyber-visible systems and information flows? Right now, we don’t really have a good picture. We don’t have something that companies can point at and say, ‘That’s it. That’s what we want to be.’ … We’re still trying to determine how we can utilize and leverage technology to be better at the way we handle manufacturing.”

The importance of technology and how it is altering the industry was strikingly evident at last year’s groundbreaking ceremony of the Mazda-Toyota plant near Huntsville, as a robot was used to turn the first shovel of dirt.

“We wanted to use technology at that site from the very beginning,” Mark Brazeal, vice president of Administration for Mazda-Toyota Manufacturing says. Brazeal adds that hiring for the new facility is already underway and the first workers will arrive on site in July, two years before the plant is scheduled to begin production.

Hiring those workers will not be as easy as it used to be, which is another potential problem facing the industry. There is an increasing shortage of skilled workers capable of handling high-tech manufacturing. Recent research studies have indicated more than 500,000 jobs across all of manufacturing in the United States currently are unfilled because of a lack of qualified applicants, a number that is predicted to increase to 2.4 million over the next decade.

“We face the challenge that fewer and fewer young people have both the skills and the interest to work in manufacturing,” Shoupe says. “This is what keeps us up at night. … We all need to take this situation seriously.”

Brad Newman, plant manager at ZF Chassis Systems in Tuscaloosa, says that “It’s a real challenge for us to fill the jobs we have open.” Workforce development opportunities for entry-level employees are vital to meeting this employment need, he says.

To that end, manufacturers are increasingly teaming with universities and technical colleges in order to train more skilled workers. In addition, Shoupe points out that Honda has started building training centers near its manufacturing facilities in order to help keep current employees updated on the latest technology.

Of course, all the training courses in the world won’t help if there still aren’t enough people interested in even pursuing a career in manufacturing. So in addition to providing the training, auto manufacturers also need to sell the industry, emphasizing how the profession today is nothing like the sweaty, wrench-turning jobs of previous generations.

For those auto manufacturers who can fill their jobs and harness the technology, then the benefits could be tremendous. Harris says that data processing in particular can lead to significant savings in both cost and time. He notes that he visited a German manufacturing plant last year that used approximately 11,000 machines to collect data about its operating process, then used that data to constantly make improvements.

“They are showing an 8-to-1 return on investment. That’s not something you can ignore,” Harris says. “There are huge benefits in overhead costs and other things still waiting to be discovered. It’s going to take some effort to work through this, but it’s possible and definitely worth it.” 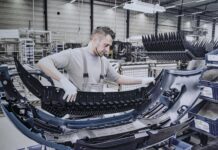 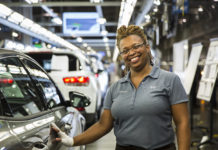