Home Features All about Cars and Economic Development

Hollie Pegg stays on the go.

As the assistant director of Asian and automotive business strategies for the Alabama Department of Commerce she’s constantly in motion, traveling around the state, the country and abroad, particularly to Asia – an area she’s become quite familiar with dealing with carmakers from the region which have built plants in the state.

The day she squeezed in time for this interview, she was in her car, traveling to Anniston, Alabama to meet with a company considering an expansion.

“I spend a lot of time in bringing those new industries in, but obviously, we also have to think about the companies that are already here and how we can best support them to be successful,” she says.

Many of those companies are automotive in nature, and that plus economic development -bringing industries into the state, sums up a big chunk of Pegg’s career.

“Before I joined the Department of Commerce I worked with a regional planning commission and that was right during the time that Hyundai was locating in Montgomery,” she says. “So, my early work was supporting those suppliers and I made that transition over to what was then the Alabama Development Office. Initially my responsibility was just the Korean automotive industry. So, I worked directly with Hyundai… and those suppliers — which we have well over 75 now in this state.”

As Alabama’s economic health has become more and more connected to the health of the automotive industry, Pegg’s responsibilities at commerce, which she joined 13 years ago, have reflected that shift. Most of her time is spent working with car manufacturers and suppliers of parts and components for cars. 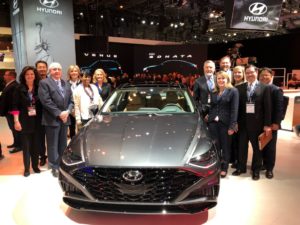 “Automotive is critical to Alabama since we have Mercedes locating in Alabama in the mid-90s, then growing from there, Honda, Hyundai, Toyota Engine plant and our newest friends, Mazda – we have the Mazda Toyota assembly facility under construction in Huntsville,” she says.

With most of the automotive manufacturing plants in the state being subsidiaries of Asian countries, Pegg’s focus is on the East. “So, I do go to Asia, usually about twice a year, sometimes a little more,” she says. “We visit both Japan and Korea. We’re also heavily involved in the Southeast U.S. Japan [Association], the Alabama Chapter of SEUS.”

“The Southeast U.S.- Japan Association (SEUS-Japan) was established in 1976 to promote trade, investment, understanding and friendship between Japan and the southeastern United States,” as noted on the organization’s website, which points out that there is a Japanese counterpart of the organization as well, and that both the US and Japanese groups include top business leaders and government officials like Pegg. 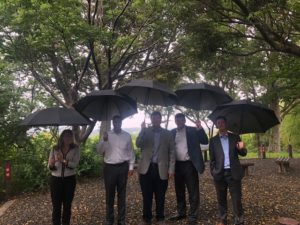 Despite all that, though, Pegg can’t speak either Korean or Japanese. “I think we have determined that that’s just not for me,” she says. “I can say ‘thank you’ pretty well. Unfortunately, that’s about it. Luckily most of our Asian friends speak very good English.”

A Montgomery native since the age of 10, Pegg’s career has been focused on improving the economic fortunes of the regions in a state whose residents have been particularly subject to the ebb and flow of industry. For seven years, she worked as program manager of Economic and Community Development for the South Central Alabama Development Commission, working directly with local governments to promote growth and prosperity in six mostly rural counties.

Working for the public good is a natural outgrowth of her educational background – “I have a BA in history from Auburn, a master’s degree in public administration,” she says. “That really started my interest in public sector work and my entire career has been public sector work.”

“It’s amazing to drive down the interstate and to see those companies, companies that we have worked with as a team and that I’ve worked with as part of my role at the Department of Commerce and really understanding how that has changed other people’s lives, particularly in the rural areas,” she says. “Alabama was hit very hard by NAFTA… We had a strong textile industry and particularly on that 85 corridor going toward Georgia, they were hit very hard – Chambers County and some of those other places. So really understanding that when those [automotive] suppliers came in and the jobs they were able to create, allowed people to keep their homes, to not have to move… to me that was the most important part of economic development.”

The automotive industry has more than made up for the loss of textile jobs in Alabama, she notes.

“You can go back and look at the unemployment numbers in many of those areas, particularly if you look at Chambers County and that sector over there in east Alabama that have benefited not just from Hyundai suppliers, but also, obviously, from the Kia suppliers,” Pegg says noting that now those areas are at “double-digit employment and they are now tracking at or below the state [unemployment] average. So, it has really made a huge difference.”

Despite that, she says, there is still significant work to be done strengthening the economies of Alabama’s rural areas. “Our recent location of Toyota Mazda – I was heavily involved with that project and I think that we’re doing very well,” Pegg says. “What we’re really looking at now is how do we help the rural parts of the state. We’ve done very well with our automotive and aerospace and other industries, but we do still have a large rural section particularly in southwest Alabama that is struggling. So, I think now that’s our next step – is how can we help those areas.”

With so much on her plate, in a state where automotive developments are everyday occurrences, it’s probably not surprising that she recently spent six out of seven weeks on the road. Even so, she finds time to issue a “War Eagle” now and again – she’s an Auburn Tiger’s football fan – and she makes the time for her 16-year-old son, “who’s very involved in cross country and track… That keeps me very busy,” she says. “And I also love dogs.”

Still, talking to Pegg, it’s clear she loves the people in the state and the job that allows her to serve them.

“In Alabama, economic development is a team sport,” she says, noting that it’s not only about the commerce department. 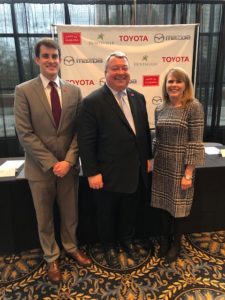 “Just as critical to that are our local partners. That is one of the things I do truly enjoy about my job, is the ability to work with economic developers and elected officials throughout the state,” Pegg says. “I’ve made some long-term, lifetime friendships and that aspect of the job is one of my favorite things. I could be working in Scottsboro, Alabama one day and in Mobile, the next. And really understanding those areas and the people there are very important to me.”