Home Features A Mentor Inside And Outside Of The Classroom

Dr. Bob Woods has a full schedule with his responsibilities as a long-time mechanical engineering professor at the University of Texas at Arlington.

He teaches a handful of courses geared toward specific aspects of engineering, such as the components of control systems and the modeling and simulation of dynamic systems. He also supervises students working on their capstone senior design project. That project covers all topics necessary to succeed in the industry from economics and ethics to psychology and finance to patent law and product liability and everything in between.

Yet, his impact extends far beyond the classroom. In 1978, when a number of his students expressed an interest in Mini Baja, a design and racing competition sponsored by the Society of Automotive Engineers, Woods agreed to serve as their advisor. Ever since, he has dedicated much time to this venture – one that, although not required, has proven significantly beneficial in ways that no textbook or classroom could.

Woods wasn’t initially very involved in the day-to-day activities, not until he witnessed his first Mini Baja competition in Phoenix, where a team from another school gave up its only spare master link so that his students could fix their car and continue in the 4-hour endurance race.

“It occurred to me that it was car against track, not team against team,” Woods says. “Suddenly, I got hooked, and here I am some 40-something years later, still doing it.”

Spearheading the team seemed to be a natural progression for Woods, who recalls working on lawnmowers with his father as a child. The Oklahoma native always had a liking for motor scooters and bicycles, and in high school, he souped-up his first car for drag racing.

He earned a bachelor’s degree from Southern Methodist University, then a master’s degree and PhD from Oklahoma State University, after which he lived in Washington, D.C. and worked in research for three years. In 1974, Woods returned to Texas to join the UTA faculty at the encouragement of a colleague.

By 1982, the racing team graduated to the more sophisticated Formula series, in which a motorcycle engine is placed in an open-wheel racecar, and each year, the students typically select three areas to adjust from the previous model, avoiding the impracticality of full redesigns. Their cars have included four-cylinder engines, turbocharged engines, carbon fiber, active aero with which the flap wings open and close automatically by way of computer, and an innovative pneumatic servo clutch and shifter.

In total, the team has had eight victories in the two annual United States competitions – Michigan in May and Nebraska in June – and they’ve won three international events in England, Australia and Japan.

“Some schools run this as a senior design course,” Woods says. “To me, that’s just fool-hearted because it takes a whole bunch more time, commitment and knowledge than that.” 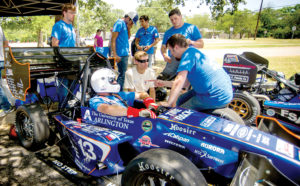 For this reason, the UTA team functions as a volunteer organization and is open to any grade level. Fifty students typically dwindle down to about 30, a third of whom make up the majority of the workforce, Woods says, and members spend anywhere from 10 to 40 hours a week in the shop. He recalls once receiving texts from his department chairman with an image of students already working at 6 a.m. “He would say, ‘Look, Bob. These guys are so ambitious, they’re already here.’ And I said, ‘They are there from last night. They spent the night.’”

That kind of commitment is something recruiters don’t take lightly.

“The fact that you’ve been on the team and held a responsible position qualifies you unconditionally for a job,” Woods says. “We teach them things about working on schedule, being on a budget, working within a team, relying on somebody else to do their part and making compromises of design opinions and so forth.”

One such dedicated former student is Tim Patek, who was on the team for eight years of his undergraduate and graduate studies. During this time, Patek designed and built molds for carbon fiber wheels that were used on the 2004 car and through the next 12 years with a couple of  iterations. He attributes finding meaningful work in the industry to an all-encompassing, hands-on experience like this, and interestingly enough, he met his current employer, Peterbilt Motors Company, while still a student, taking bodywork molds to be cut on the mill.

Patek is now a senior project engineer, designing brake systems, recruiting engineers, speaking at universities and providing tours of the diesel truck manufacturer’s production plant. He also serves on the board of the SAE Texas Section.

“Students in the program gain experience most won’t find even in an internship,” Patek says. “Learning how to motivate peers to solve problems with you that you have no supervisory control of is one of the hardest skills to obtain. In industry, there is chain of command structure and incentive to maintain employment to motivate people to work together. In a volunteer program like Formula SAE, it is more difficult for students to correlate results at the end of the year at competition to how they work with peers on a daily basis. The students that see this vision are the ones that employers want.” 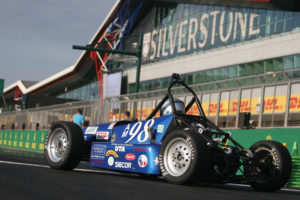 Erick Kohler was also a team member for eight years, having joined as a freshman in 1998. Now Kohler works as a rotor and drive system analyst for Bell Flight, an aircraft manufacturer of commercial and military helicopters. Although he is no longer in the automotive industry, he said his experience on the team has proved valuable to him throughout his career.

“This program benefits all industries by providing a student with the opportunity to take an idea through all phases of development,” Kohler says. “Dr. Woods takes the experience further. He pushes for excellence and pushes each student to reach their full potential. The desire is for the students to make an educated, data-driven decision, and in cases where there is ambiguity, dig deeper to find the necessary data.”

His favorite material used during his tenure as a student was aircraft fabric, which the team stretched around the tubes of the chassis, or framework of the car. It’s lightweight, durable, relatively inexpensive and easily reparable, he explains. “We have racecars over 30 years old with their original fabric covering that are still fantastic looking today.”

While most teams either destroy their cars or recycle the parts, UT Arlington is the only school that keeps each and every one, Woods says. So last July, when his team was asked to return to England for its 20th anniversary celebration, Woods took 18 former and current students and two cars – the 1998 model, which won the country’s inaugural event, and its original drivers. He also took along his present-day team and a new car to participate in the 2018 competition.

Australia is also approaching its 20th anniversary, and the team has already been invited to attend the ceremony in December of 2019 – what will likely be their next international trip, Woods says.

Last November, an endowed chair – one of the highest awards a university can bestow – was established in Woods’ honor through a $2.2 million gift from entrepreneur and businessman Paul E. Andrews, Jr. The donation will support the automotive engineering program at UTA, but more specifically, it will secure the continued legacy of Woods and his racing team, from which former students have been offered jobs with Formula One, the American Le Mans Series, the IndyCar Series, and the Newman-Haas Racing team.

“There’s something that I like to quote,” Woods says. “Universities graduate students. An industry makes an engineer out of them about two years later. At Formula SAE, they graduate as engineers, as experienced engineers, so they’ve already got a 2-year jump on anybody else.”