An 18-mile section of Interstate 85 in rural west Georgia provides a glimpse of what interstates throughout the country could look like in the future. The span of interstate is called The Ray. There is an electric vehicle charging station, and a tire safety check station where motorists can roll over a monitor at 15 mph and in seconds receive a text that displays tire pressure and tread life. Both projects are powered by solar energy and are free to use.

There is a 7,000-square-foot pollinator garden that attracts honey bees, monarch butterflies and other species; and soon a small farm crop will be planted on interstate right-of-way to take advantage of available land.

The Ray also is host to France-based Colas’ pilot project in the U.S. — a 50-square-meter section of pavement in front of the Georgia Visitor Information Center in West Point, Georgia, near the Georgia-Alabama state line. The project uses photovoltaic cells to provide clean, renewable energy in the form of electricity. It offsets power usage at the center and cars can drive over the installation.

Construction is set to begin in October on a solar project that will make Georgia the third state in the country to use interstate highway right-of-way to generate solar energy, and the first state to pilot pollinator-friendly right-of-way solar. Native flowering plants will be used as ground cover to determine which varieties best reduce erosion, maintain soil stability, reduce maintenance and support local ecology.

The Ray is a living laboratory and proving ground for ideas and technology that aim to create safer and cleaner methods of transportation in the United States and throughout the world, according to Allie Kelly, The Ray’s executive director. It’s also a charitable foundation and a movement, she said.

The Ray was created in 2014 when Georgia Gov. Nathan Deal designated the 18 miles of interstate the Ray C. Anderson Memorial Highway to honor the founder and chairman of carpet giant Interface Inc. Anderson started the carpet tile company in the 1970s using $20,000 from his daughters’ college fund and grew it into a global leader valued at more than a billion dollars. The corridor begins at the state line in West Point, Ga., where Anderson was born, and ends at Exit 18 in LaGrange, Georgia, where Anderson started the company.

The Georgia Tech graduate and engineer died in 2011, shortly after he was diagnosed with pancreatic cancer. Anderson was known for his strong belief that companies throughout the world could become more profitable by doing more for the environment. He delivered about 150 speeches a year on the topic, and inspired companies including The Coca-Cola Company, Walmart and Unilever.

“It is important for people to understand that Ray Anderson was not preoccupied with the environment,” says Kelly. “He was a numbers guy, hard-nosed, super competitive and always selling; but a charming Southern man. He started out on a shoestring and created a classic American success story.”

A couple of things happened in the 1990s that prompted Anderson to transform Interface into a global leader in sustainability. He became a grandfather, and he began to feel pressure, externally, from designers who were buying his products, especially on the west coast; and internally from his own employees. Anderson heard the growing chorus and set out to learn what he could do, Kelly says.

“Anderson had an epiphany. He realized all carpet eventually goes to a landfill and that it takes about 300 years to break down. He began to refer to himself as a plunderer of the environment and made it a mission to divert all of Interface’s waste out of landfills,” she says. 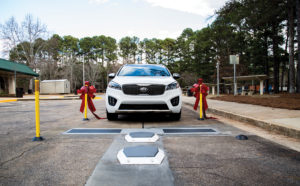 Interface became a model for other companies and was the first company to recycle old carpet into new carpet, Kelly adds.

“No one expected Anderson to die soon after he was diagnosed with pancreatic cancer,” Kelly says. “Everyone was in shock, especially his two daughters. Most of Anderson’s wealth was bequeathed to start the Ray C. Anderson Foundation, but there wasn’t any paperwork to outline what the family foundation was supposed to be. They had a lot of millions and a new foundation and no instructions.”

Anderson’s daughter, Harriet Langford, who is trustee of the Ray C. Anderson Foundation and president of The Ray, was working on a way to honor him in the community. She worked with Georgia’s governor and state legislature to name the highway in his memory, but later questioned if a highway was the right choice.

Kelly describes what happened. “The day Gov. Deal signed the bill, Harriet goes home to LaGrange and as she and her husband are on the back porch having a glass of wine to celebrate, she looks at him and says, ‘I just put the name of the greenest industrialist of the century on a dirty highway. Think about all the car wrecks, dead animals, cars polluting the air and rolled up tires on the side of the road. What is sustainable about a highway? Daddy would not like his name being on a highway.’ She had her own epiphany just like her dad did in the 1990s. She asked the question, ‘What if highways were safe and sustainable and smart?’ And she started on a journey.”

The Ray was started in 2014 to address those ideas. It was part of the family foundation, but in 2015 became a 501(c)3 managed by a board of five, staff of two and two interns. The foundation could make grants to organizations but was supposed to work off the endowment of the estate and not take in new funding. The Ray, which has an office on West Peachtree Street in Atlanta and space at the visitor’s center, enables public-private, philanthropic partnerships and welcomes ideas.

The large solar energy project breaking ground in October received the green light in August, when the Georgia Public Service Commission approved funding for Georgia Power to construct, own and operate the one-megawatt solar array with 2,600 high-efficiency panels on Georgia Department of Transportation (GDOT) property on The Ray. The electric grid is expected to begin receiving energy in spring 2019. Solar energy produced there, and all associated renewable energy credits will benefit Georgia Power customers. 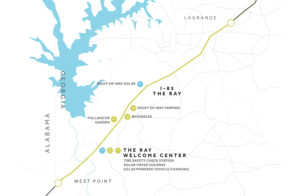 “We believe there is a natural connection between energy and transportation,” Kelly says. “Not only can we safely generate renewable energy using transportation infrastructure that we already own, but departments of transportation all over the country have the opportunity to tap into a brand-new revenue source through land leases, lower energy costs, credits and other business models.”

Kia Motors Manufacturing Georgia (KMMG), which is located on the 18-mile corridor, partners with The Ray.

“Kia is more than a mobility provider, we are moving people forward and upward,” says Stuart C. Countess, KMMG’s chief administrative officer. “Our partnership with The Ray is important because it gives people the opportunity to experience innovation in mobility in our backyard. Safe mobility and eco-mobility are two key principles shared by KMMG and The Ray.”

“For us, there was a critical gap that Kia wanted to address with electric charging,” says Corinne Hodges, senior manager/head of department, public relations at KMMG. “We don’t build electric vehicles in Georgia, but Kia does make electric cars.”

Prior to installation of the station, most electric cars could not make the drive from Atlanta to Montgomery because there was nowhere to charge, says Hodges.

A Ray partnership with KMMG brought the WheelRight Tire Pressure Monitoring System to the visitor center.

“Many drivers don’t know if their tires are over inflated or under inflated,” says Hodges. “This can cause accidents. The roll-over system installed at the information center provides tire pressure, and tread depth at hundreds of points. Typically, people test tread depth with a penny. That measurement is flawed, because often people check tread at only one point in the tire.”

According to the International Tire and Rubber Association, tire underinflation is the single most common factor in tire failure.

Matthew Quirey, a landscape architecture graduate student at the University of Georgia, stops to check his tires every time he travels home from visiting friends in Alabama.

“It’s free and it’s high-tech,” says Quirey. “The pressure is always wrong on at least one of the tires on my Ford Fusion. It just takes a minute to drive through the tire monitoring system and receive a report. There’s also a free air machine where you type in the correct pressure and the machine inflates the tire for you. In Athens, air is $1.50, and you have to have quarters.”

For more information about The Ray, go to theray.org.